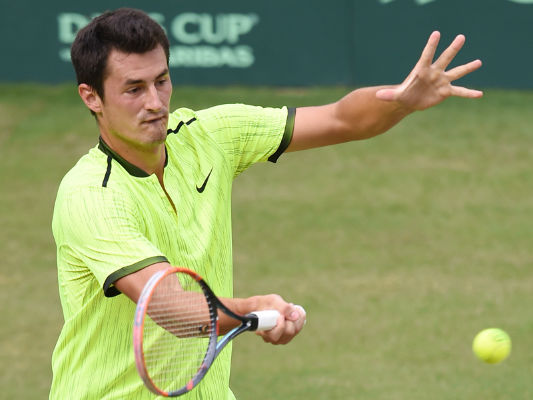 Love or loathe them, Bernard Tomic believes he and Nick Kyrgios can help Australia break its longest Davis Cup title drought in almost a century.

It’s been 13 years since Australia last raised the most prized trophy in team tennis but Tomic and Kyrgios are hoping to revive the glory days after being reunited in Davis Cup for the first time since 2013.

Two of the most polarising figures in Australian sport, Tomic and Kyrgios haven’t teamed up since Kyrgios’s Davis Cup debut as an 18-year-old rookie in Warsaw.

Injuries, illnesses and suspensions have conspired against Australia but at last captain Lleyton Hewitt will have the country’s top two players on deck for this week’s World Group playoff against the Slovak Republic.

For Tomic, it’s been so long since he played with Kyrgios he’s forgotten and he’s excited about what the new era may bring.

“We haven’t played together in a Davis Cup together yet. It’s a new week and we’re excited,” he said.

“I’m sure everyone else is. It’s something that has many more years to come. The last few days has been a good experience. I’m really excited to be a part of it from Friday with Nick.

“I experienced something last year. We were in the semi-finals against the UK and we had a chance there.

“So it just shows how close we are. I would love nothing more one day than to be a Davis Cup champion with these guys and it’s all going to take a big team – not just myself.

“It’s a challenge I’m ready to go through and hopefully one day we can win that trophy.”

Victory over a depleted Slovakian outfit led by world No.123 Jozef Kovalik would present Australia with the chance to win the Davis Cup in 2017.

Australia last won the Cup in 2003 and 14 years between drinks – if they won in 2017 – would be the longest wait for the 28-times champion-winning nation since before World War II.