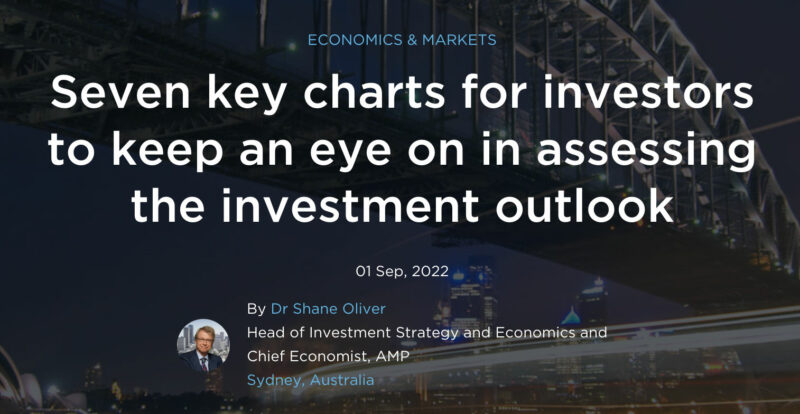 Shares remain vulnerable in the short term. They had a nice rebound from their June lows into their mid-August highs recovering just over half of their earlier decline (which was -24% for US shares and -16% for Australian shares) helped by mostly good earnings reports and hopes some central banks, including the Fed, may be getting closer to a “dovish pivot”. But as the US share market got overbought and hit resistance at its 200-day moving average, shares then became vulnerable to ongoing central bank hawkishness and recession risks and so have pulled back. While we are optimistic on a 12-month horizon, shares are at high risk of further falls and a re-test of their June lows in the short term: central banks including the RBA remain hawkish & a long way from a “dovish pivot” – as evident in recent comments by various central banks and their officials; recession risks remain high running the risk of more earnings downgrades; September has been the weakest month of the year for US and Australian shares particularly when markets are in a downtrend; and geopolitical risks remain high over Taiwan, Ukraine and the US mid-terms. This note takes a look at seven charts we see as critical for the outlook.

US and global shares have already entered a bear market (as defined by a top to bottom fall of 20% or more). But whether that bear is deep or mild and whether Australian shares will be drawn into it, critically depends on the severity of the economic downturn. For Australian shares, severe setbacks (or “grizzly bear” markets) tend to be associated with US recession, particularly over the last 50 years, with the exception of the 1987 crash. Of course, it’s the same for the US share market. So whether global recession and in particular US recession can be avoided or if not that its mild will have a significant impact on how far share markets fall. Our assessment is that global growth will slow (to around 2% next year) – but while Europe will probably go into recession the US and global economy overall can probably avoid it. Global Purchasing Managers Indexes (PMIs) – surveys of purchasing managers at businesses – will be a key warning indicator. They have slowed but are not at levels associated with recession. For our upbeat 12-month view they need to stabilise around 45 to 50, as opposed to falling below that.

A lot depends on how far central banks – and in particular the Fed – raise interest rates. For now, central banks remain hawkish. But there is some light at the end of tunnel as pipeline inflation pressures (outside of the Eurozone energy crisis) are moderating: global business surveys show improving delivery times, falling order backlogs and falling price and cost pressures; and freight rates, metal, oil and food prices are off their highs. This is consistent with an ongoing decline in our Pipeline Inflation Indicator which in turn is consistent with US inflation having peaked. The key is that our Inflation Indicator continues to fall leading a further decline in US inflation – if so, this should start to allow the Fed to slow down its tightening in the next six months and then turn dovish. Europe and Australia are about six months behind the US.

Also critical in this regard is unemployment and underemployment. Both have fallen to levels in the US and Australia, suggestive of very tight labour markets and accelerating wages pressure. This is already clear in the US, with wages growth rising to around 5-6%, and starting to become evident in Australia. Stronger wages growth is desirable but if it goes too far it could run the risk of a wage price spiral which would make it harder to get inflation back down without much higher interest rates. So ideally, we need to see some cooling of jobs markets with ideally a stabilisation in unemployment. Not too hot, not too cold. This might be starting to become apparent in the US.

The concept of inflation expectations or inflation psychology sounds rather academic but the experience of the 1970s tells us that the longer inflation stays high, the more businesses, workers and consumers expect it to stay high and then they start to behave in ways – in terms of wage demand, price setting and tolerance for price increases – which can perpetuate it (in the absence of a deep recession). Short-term (1-2 years ahead) inflation expectations are now clearly high, but the good news is that longer-term inflation expectations remain reasonably low. In the US, a long-watched survey of consumers by the University of Michigan shows that inflation expectations for five years or more ahead are around 3%. This is consistent with 2% or so inflation and suggests the job of central banks is far easier today than say in 1980 when the same measure was around 10%. The key is that it stays low.

Consensus earnings growth expectations for the year ahead are currently around 8% for the US and globally and around 6.5% for Australia. This marks an understandable slowdown from the last year. They have been getting revised down lately – see the next chart. They still look a bit too high though, so a further deterioration in earnings revisions is likely, but a deterioration on the scale seen in the early 1990s, 2001-03 in the US and 2008 would be bad news.

So far this year the continuing strength in company profits and a fall back in share prices has left share market valuations relative to bonds (as measured by the gap between earnings yields and bond yields – which is a proxy for shares’ risk premium) looking ok, despite the rise in bond yields. However, the gap has narrowed to its lowest since the GFC in the US. Compared to the pre-GFC period shares still look cheap. It will be key to watch bond yields (where further rises will make shares less attractive) and earnings downgrades (which would also make shares less attractive).

The US dollar is a counter cyclical currency, so big moves in it are of global significance and bear close watching. Due to the relatively low exposure of the US economy to cyclical sectors like manufacturing, the $US tends to be a “risk-off” currency, ie, it goes up when there are worries about global growth and down when the outlook brightens. Over the last year the US dollar has surged with safe haven demand in the face of worries about recession and war. This has been accentuated by the Fed raising rates ahead of some other major central banks. If the global outlook starts to improve again this will likely be confirmed by a downswing in the US dollar and a rise in the $A.

Subscribe below to Oliver’s Insights to receive my latest articles