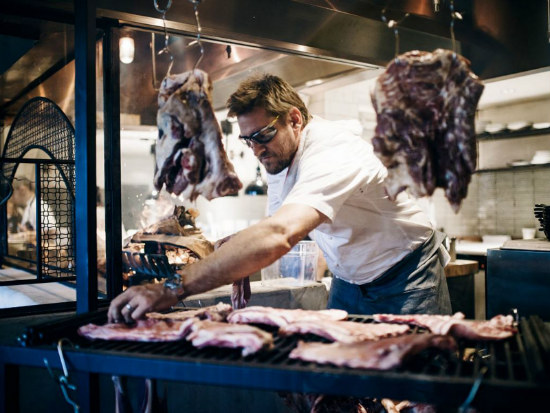 It’s a confronting sight for a place where you eat: a glass case stuffed with mammoth carcasses.

But the furry bodies are an immediate match for the thick aroma of smoked charcuterie wafting through Curtis Stone’s latest jaunt on Sunset Boulevard.

Your eyes divert from what’s hanging from the rafters in the shopfront to what’s hanging over the fire in the open kitchen, where slabs of specialty cuts await to be sliced and diced.

In a city famous for what’s done in front of the big screen, Stone intends to take you behind it.

“We wanted it to smell smoky, for both the butcher shop and the restaurant,” he says.

“Every day I light the fire, I leave the fan off for the first five minutes so it gets quite smoky, and then throughout the day it dissipates.

Welcome to the Stone brothers’ experience, where Curtis, along with brother Luke, aim to bring the Aussie biff back into butchery – all the way in Hollywood.

It’s been two-and-a-half years since Australia’s celebrity chef whipped up a frenzy stateside with his first restaurant in Maude, a love project paid in homage to his paternal grandmother.

Complete with vintage floral dinnerware, the 25-cover setting in Beverly Hills is an experimental nine-courser centred around a key ingredient each month that will challenge your palette and your senses.

More importantly, it also took out a number of prestigious local awards, thrusting the former Melbourne resident onto the Californian map, and paving the way for a second shot at the culinary scene.

Now, as one of the most anticipated openings of the year, the recently-opened Gwen is literally cut from the same cloth.

Australian-based Luke was taking their mum’s floral business to soaring heights back home when Curtis initially contemplated setting up shop on our side of the Pacific.

“But I just got so busy here that the thought of trying to run one back there and one over here … it’s impossible,” Curtis says.

“I always wanted to do something with my brother, and at first we thought about doing something a bit more casual, like a cafe and flower shop. So my brother moved here.”

Gwen, this time in honour of their maternal grandmother, runs not only as a butcher shop and restaurant, but the only port for David Blackmore’s wagyu out of Victoria.

On this night, Stone apologises for a shortage in supply of the renowned Aussie beef.

“It’s been a trainwreck, but it always is,” he says of the opening week.

“There’s always a mistake that could’ve been done better. It’s just how quick you can catch them and how fast you can jump on it so the experience is never altered.”

Instead, the replacement, a Texas rump, is the salacious climax of a five-course tasting menu set up with a bite-sized array of duck, salami, pork and liver terrine and orecchiette pasta.

The melon sorbet is an underrated finishing touch for the night.

Stone later promises that guests of the 80-seat, rustic-themed interior, high-ceiling venue, would be able to request the famous Japanese bred beef.

“It’s the best beef in the world,” he boasts.

“Wagyu beef itself actually has a lower fat rendering point, so it almost melts in your hands while you’re cutting it. It’s this beautiful, buttery product,” Jermasek says.

“For me it’s all visual. When you look at it, you know it’s different. It’s the most amazingly, highly-marbled, high-quality meat you’ve ever seen. And we’ve never been able to have it out here.”

“What we’re able to do here is to bring something to Los Angeles that doesn’t already exist.

“Gwen, primarily at its core, is a European-style butcher shop, which means we get a lot of things people don’t expect to see. It’s been such a privilege to bring that stuff in.”

A privilege that, at least initially, Stone was concerned wasn’t going to fly with the locals.

“When you speak to most people, they’re like, `You’re crazy. A butcher shop in LA? LA’s the opposite of that. Everyone’s turning vegetarian’,” he says.

“But I don’t agree with it. It’s just a stigma.

“Yes, there’s a lot of vegans here. But if you can show a process for what it is and make someone stop and think, I think it’s a good thing. There’s also a lot of people that just love good food.”

GETTING THERE: Qantas, Virgin Australia, American Airlines, Delta and United all fly daily to Los Angeles from major Australian cities.

* The writer travelled as a guest of Visit California.